“Friends congratulate me on being so appreciated, but to me, it is another very serious position,” said Karapet Babayan (52), an oncologist and founder of the “GK Clinic”, who officially became the Honorary Consul of Armenia in Lithuania last week.

You became the only honorary consul of Armenia both in Lithuania and in the Baltic States. Was it a memorable and significant event?

The rumors about my chances of getting such an offer lasted for a while. I was considering whether I should agree: am I ready for this, or could I do something good for both countries. I have never needed this position in order to be honored. Many people already know or recognize me, so I am not seeking greater publicity.

During the exequatur ceremony, I felt very honored. I remembered all of my friends who lived here, in Armenia or anywhere else in the world. They sent me wishes and congratulated me. A fellow professor from the University of Marseille, that is known for having the only department in the world where people can study Armenian language and literature outside of Armenia, called and congratulated me. When you are surrounded by such people, you realize you are not alone. When the exequatur was presented to me, a group of Lithuanian friends was present. I knew they were together with me, so I felt calm.

Your wife Gyte Grigonyte-Babayan, who is a doctor of plastic and reconstructive surgery, was by your side that evening as well as for many years. Is her opinion important to you?

Her support is paramount. When I was offered to become an honorary consul of Armenia in Lithuanian, Gyte worried a lot. She realized that we would spend less time together, but she did not try to stop me from becoming an honorary consul. She knew how much I loved Armenia and fellow Armenians. 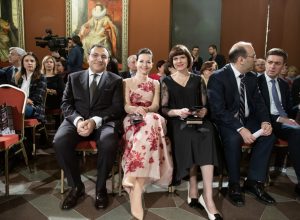 You have been living in Lithuania for almost forty years. Do you have anyone you could return to in your native city Yerevan?

I came to Lithuania thirty-seven years ago to study medicine and stayed here. My parents were laid to rest in Lithuania. My two older sisters live in America, so I fly to the other side of the Atlantic to meet my family. I usually visit Yerevan for business and business matters.

When visiting Armenia, do you feel a strong connection with your roots and home country?
It is difficult to answer. When the plane lands in Vilnius after the trip, I feel both happy and relaxed. My friends are joking that I am the only one like this. Being in Vilnius, I feel at home, but Armenia is my historical homeland. I don’t have my own house there, but when I fly to Yerevan, I meet my childhood friends and cousins. My heart feels happy then. A lot has changed in Yerevan since my childhood, but I happy to know that nothing stands still. However, Lithuania is my home. 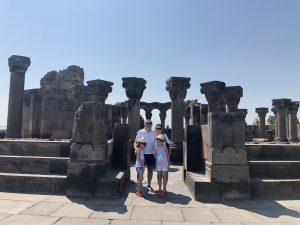 You call Lithuania your homeland.

I feel this way as I’ve been doing much under the flag of Lithuania. I am always introduced as a representative of Lithuania. Sometimes people tell me I don’t look like a real Lithuanian so I explain to them that my roots are from elsewhere.

When visiting Armenia, my heart feels happy. Without an inner feeling, I wouldn’t want to be an honorary consul.